George Washington had to be a four touchdown underdog to the British.  The opening line should have been higher, if not for the French money coming in on the Americans’ side.  There was simply no way the colonials could go toe to toe with the redcoats and win, and they didn’t.  The revolution wasn’t won by beating the British at their own game; it was won by playing a different game.  It was won through asymmetric warfare.

When two nations or armies or football programs whose relative power varies greatly, the weaker program must employ a different attack and style.  The best chance for the underdog to win is not to try to run the spread better than Gus Malzahn, create a more structured developmental system than Nick Saban’s process or call better plays than Steve Spurrier.  The route to success is to find your own advantages and make your own way.  It’s what Washington did in the revolution, and it’s what Bret Bielema is doing now at Arkansas.

During the golden era of the SEC (which may or may not be over) when the conference was winning the national championship every year, a template of the great SEC teams emerged.  Those teams used transcendent defensive line play, the origin of the SEC speed myth, as the catalyst for stifling defenses and paired them with a spread or pro style offense.  This structure was validated each national championship game, and most of the rest of the conference sought to emulate that model.

As many found, there can’t be 14 Alabamas.  There are only so many players who can fill the spots their dynamic requires, and most of those players are going to the teams that are already on top.  So how is another team to get on top, by beating Alabama and Florida at their own game?  No, they find their own strengths, or create them, and exploit them.  This is asymmetric warfare.  Bret Bielema understands the adaptation of the concept, call it asymmetric football, and is several years into implementing just that strategy.

The night before the 2006 Fiesta Bowl everyone knew that Ohio State was the best team in college football.  They had just beaten the second best team, Michigan, in their last regular season game, and their coronation as national champions only needed the formality of winning the bowl to be complete.  They were the product of the tradition rich Big Ten conference and looked all year to be a traditional and historical college football power.

Everyone remembers the slaughter Florida visited on the Buckeyes the next night, and the result of that game, and the next year’s Sugar Bowl against LSU, changed a lot of minds about what it takes to win in modern college football.  Out was the old Big Ten and their traditional offenses and defensives schemes.  In was SEC speed and a new era of spread and pro style offenses.  Popular wisdom held that the Big Ten style of play was better suited for a time gone by. 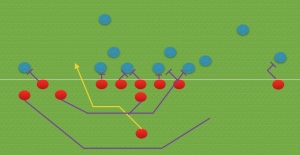 While Ohio State’s shortcomings appeared to justify the idea that the way the Big Ten played the game was inferior to the SEC, many people overlooked Wisconsin.  During the same era that the SEC was being lauded for everything, Wisconsin was playing a different brand of football and winning.  The Badgers won conference titles in 2010, 2011 and 2012 under Coach Bielema, and they did it with their power running game.

In 2013 Bielema came to Arkansas and started building his program in the model of his Wisconsin teams.  He installed the power running scheme and balanced it with a strong defense.  2013 was the beginning, and clear progress was made in 2014 with Jonathan Williams and Alex Collins finishing fourth and fifth in the conference in rushing.

The installation of the power running game from Wisconsin is not designed just to create a one year contender.  The scheme cemented the Badgers as an every year threat to win the Big Ten, and it will solidify Arkansas as an every year threat to upend the SEC West.  The long term viability is an important aspect.  The scheme is not a gimmick, so there’s little chance some enterprising defensive coordinator is going to find a hole to be exploited every play.  It is a schematically sound approach upon which to build a program.

An advantage of this particular scheme is that Arkansas is the only SEC team running it.  For that reason Bielema doesn’t have to have the best spread quarterback in the conference to make his offense work, and he doesn’t have to out recruit Alabama and LSU for the blue chip players.  He has to have good players, but what fits his mold is slightly different than the other teams, and that is an advantage that cannot be overstated.

There are players who are a better fit in the Arkansas system than they would be anywhere else in the conference.  If that players wants to be in the SEC, it’s an easy sell for the Hogs.  There are also players, who could play anywhere, who would prefer to play in a power running scheme or who have watched Wisconsin put running backs and offensive linemen into the NFL for years.  They will naturally gravitate to Arkansas.  When it comes to these players the Razorbacks have given themselves a comparative advantage over teams who are rarely at a disadvantage.

Billy Koehler is the founder of ThirdDownDraw.com and a contributing writer at DixielandSports.com. He has been covering college football since 2006. You can follow him on twitter @billykoehler.
View all posts by Billy Koehler →
This entry was posted in Schemes and tagged Alabama, Alex Collin, Arkansas, Bret Bielema, Jonathan Williams, Power. Bookmark the permalink.