How Alabama will Defend Wisconsin

Alabama will open the season against Wisconsin and their power run game in Arlington.  This week should be the time the Crimson Tide will begin to focus on the Badgers.  Of special importance to the Tide will be Wisconsin’s power running game.  Wisconsin runs a style of offense that Alabama doesn’t see very much except for once a year against Arkansas.

Last season the Hogs nearly beat Alabama in Fayetteville, losing 14-13.  Bret Bielema exported the Wisconsin running game to Arkansas, so expect Alabama to employ many of the same defensive techniques that were effective against Arkansas.

Alabama will be in their 3-4 defense most of the game.  They will be in a base formation often, but they will occasionally line the nose guard up in a one technique (across from the center’s shoulder) to the weak side and the defensive tackle in a three technique (across from the guard’s shoulder) to the strong side.  One or more outside linebackers will be flexed up on the line.

Strong Side Inside Linebacker Play

This crashing, strong side linebacker disrupts some of things Wisconsin might try to do.  Wisconsin will want to use their guards to help the center or the tackle.  Depending on the Alabama alignment and the run play called, the guard will either go to help the center or the tackle.  When he does this he will either be executing a double team block or a combo block.  A double team block means the guard and the other lineman will both block a defensive lineman for the duration of the play and try to push him as far as possible.  A combo block means the guard and the lineman will double team a defensive lineman at first, but once they get the lineman moving one of the offensive linemen will stop blocking the defensive lineman and go block a linebacker.  It sounds like it would take a lot of time, but it happens really fast.

If Alabama lets Wisconsin do this, and if Wisconsin can be effective with these blocks, there will be lots of room of the Badger running backs to run.  Alabama’s strategy of moving the linebacker to the line of scrimmage quickly creates problems for both block types.  When the guard is trying to execute a double team he will have to get to the man across from the center or the tackle.  If the linebacker is quick he will get to the line and hit the guard before he has a chance to get there.  This ruins the double team and makes it more likely the center or tackle won’t be effective with his block. 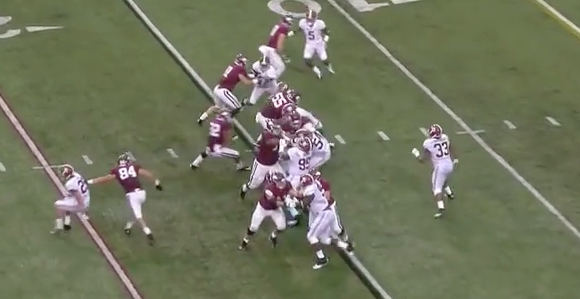 The Alabama linebacker is reading the offensive lineman rather than the backfield players, so even on play action plays when the quarterback and running back are faking a run play, the guard is required to pass block.  When he starts to pass block the linebacker does not come up, and the passing game isn’t able to take advantage of this aggression.  This is the strength of this strategy.

Although they weren’t able to suck the linebacker into the line on passing plays, the Razorbacks did have success with shallow crossing routes, both off play action and drop back, because of the large number of Alabama defenders close to the line.  The Tide sometimes got in each others’ way.  This was especially true when Arkansas ran bunch formations, and Alabama may be vulnerable to that attack again.

Most plays it seemed the strong side, inside linebacker was crashing against the run as soon as he read it with the exception that Alabama’s inside linebackers didn’t crash as hard against two tight end sets, so Wisconsin may consider using those.  Against those defenses the inside linebackers seemed to be doing more reading and reacting.  However if Wisconsin wants to go to a two tight end set for the blockers and to keep the linebacker from crashing, it will have to be aware of the strong safety who will almost always be coming down in the box to help with the run.

Although the play action plays weren’t terribly effective, Arkansas had success showing pass and running the ball with some draws.  The guards feigned pass blocking causing the linebackers to drop to their zones, then the guards released and were able to engage the linebackers in space further down the field.  The Hogs made some good yards with the play and probably should have called it more.  If Wisconsin’s guards can play in space against the linebackers they should be able to have success too.

Stopping the Wisconsin running game will be the major point of emphasis for Alabama.  When the Badgers get into the red zone, especially inside the 10, Alabama will go to a different front.  Against Arkansas Alabama ran a double eagle or bear front.

This is known as the double eagle or bear front.  Notice the defensive tackles are aligned over the guards, which will clog the middle and make it difficult to get a push there or open any running lanes.  It will also be very difficult to execute any double teams there.  The Alabama inside linebackers are playing on the line of scrimmage in a 5 technique, across from the tackles’ outside shoulders. The outside linebackers are on the line and are playing with their hands down like defensive ends.

In the scrape exchange the two players exchange responsibilities.  The defensive end slants hard to the inside to take away that running lane, and the linebacker steps back and moves to the outside.  A scrape exchange is often used to frustrate the read on an option play, but Alabama uses it to clog running lanes and confuse blocking assignments.

Wisconsin will have seen the film of the Arkansas game and will add some wrinkles to take advantage of what the Tide will try to do.  Of course, Alabama won’t do the exact same thing, but watch the inside linebackers and their engagements with the guards.  Pay special attention to the strong side, inside linebacker to see if he is crashing the guard.  If that engagement is happening immediately and at the line of scrimmage, it may be a tough day for the Badgers.

Billy Koehler is the founder of ThirdDownDraw.com and a contributing writer at DixielandSports.com. He has been covering college football since 2006. You can follow him on twitter @billykoehler.
View all posts by Billy Koehler →
This entry was posted in Concepts and tagged 3-4, Alabama, Arkansas, Bear, Combo Block, Double Eagle, Double team, Scrape Exchange, Wisconsin. Bookmark the permalink.
Loading Comments...
Comment
×
%d bloggers like this: