Variations on the Smash in E Lansing

Michigan State defeated Oregon Saturday night in a game that was supposed to be a clash of styles.  From the West Coast came Oregon with their fancy uniforms and fancy, high octane offense to match.  Contrasted against the new power were the Michigan State Spartans of the Big Ten, a defense first team running a traditional offense.

The result of the game wasn’t a vindication or indictment of either team or philosophy: they’re both quite good.  In fact, when push comes to shove, they attack some problems quite similarly.  Look at two key 4th down plays in the second half.  On each play, one by Oregon and one by Michigan State, both teams passed for first downs using the same concept.

A smash route is a combination of two routes to put a cornerback playing zone coverage in conflict.  One receiver, usually the outside receiver runs a pattern to the flat in front of the corner.  Then another receiver, usually from the slot, runs a corner route behind corner.

The cornerback is forced to choose.  Both receivers are in his zone, and he can’t cover them.  To make matters more difficult the receiver in front of him is hard to ignore since he is in his line of sight.  He may be unaware of a receiver behind him until the ball is thrown.  If the defense is playing cover two, the safety is likely too far away to help with the deeper route.  The quarterback makes his choice based on what the corner does and throws the ball.

The smash concept is popular at multiple levels of the game because it is sound.  It puts the defense in a difficult position.  It works best against Cover 2, but is also good against man coverage.  Oregon and Michigan State ran variations on the traditional route combination but employed the same concept.

The cornerback at the bottom of the screen is in zone coverage and is the target of the routes.  The inside receiver runs an out route in front of the corner to distract him.  The outside receiver runs a route to the middle of the field before getting back outside behind the corner.

This isn’t the traditional way of drawing up the smash route, but it is the same concept.  The slot receiver cuts in front of the cornerback.  His cut is also short of the line to gain, so he either made a mistake or was trying to draw the corner forward.  The outside receiver begins his route by leaving the corner’s zone and attention before coming back behind him for the first down catch.

Earlier in the game the Spartans used a similar concept but with different routes.  They ran their play to the short side of the field and didn’t have as much room for lateral routes.  The outside receiver ran a hitch to occupy the corner and the slot receiver ran behind him. 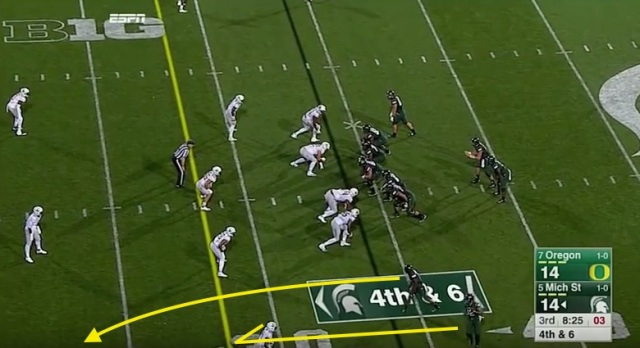 As soon as the corner stays shallow quarterback Connor Cook delivers the ball to the slot in stride.  However, it almost didn’t work.  Oregon had a safety over the top, but because he was on the short side of the field with two receivers, he was already relatively close the the sideline.  The corner was beaten, but the safety nearly ruined the play.

There is a saying in football that nothing is ever really new.  It may seem new, but it’s just a variation or tweak to something that has already been done.  Although neither team ran the traditional combination of an outside hitch and an inside corner route, both teams employed the smash concept.  They took a fundamentally sound attack and added their own wrinkles to it.  They were well designed and well executed plays employing a proven strategy, and it showed.

Billy Koehler is the founder of ThirdDownDraw.com and a contributing writer at DixielandSports.com. He has been covering college football since 2006. You can follow him on twitter @billykoehler.
View all posts by Billy Koehler →
This entry was posted in Concepts, News and tagged Michigan State, Oregon, Smash Concept. Bookmark the permalink.

1 Response to Variations on the Smash in E Lansing