Texas Tech and TCU staged an immensely entertaining game, complete with an outstanding finish.  Here is TCU’s go ahead touchdown with 23 seconds left

TCU had driven down the field, but they stalled on the goal to go series.  It was 4th down and goal from the four yard line.  TCU trailed Texas Tech 52-48.

Texas Tech had four down lineman to rush the passer.  All of the receivers were covered in tight coverage, as they had to be since nearly any completion would be for a touchdown. 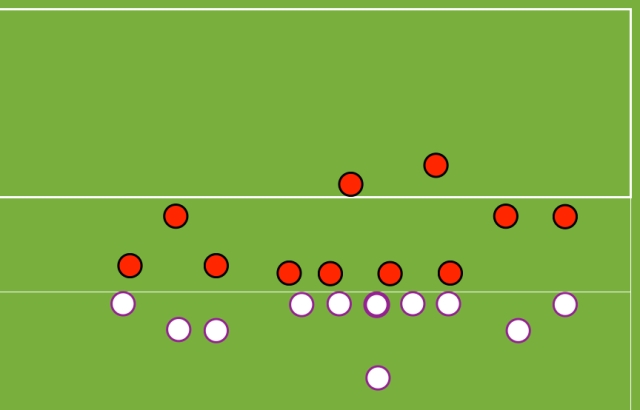 The spy has responsibility for making sure the quarterback cannot run the ball himself.  If the QB takes off on a draw or scrambles, it is the spy’s job to tackle him.  There was also a safety in the middle of the field.  His responsibility is unclear, but at the snap he moves to the short side of the formation to help in coverage.

On both sides of the field the TCU receivers are running crossing patterns.  These plays are designed to create separation from the defenders by bumping into them or causing them to bump into each other.  Alternatively the receivers can get open on the patterns by making good breaks.

Bumping into a defender on a pass play on purpose is not, strictly speaking, legal.  It is called a pick by those who defend it, or a rub, by those who practice it.  Either way, it is offensive pass interference.

The inside receiver on the trips side of the formation appears to be out there solely to pick the defenders.  He manages to contact the defender covering him and then free the next receiver from coverage by picking his defender. 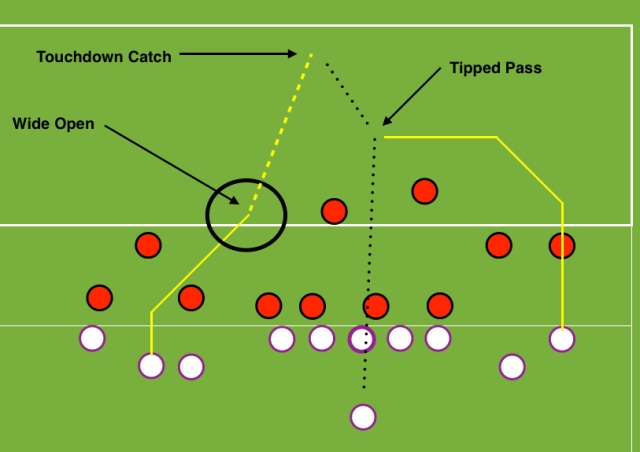 The ball was tipped up into the air, and the middle receiver from the wide side was there to come down with it, just in bounds.  The receiver who caught the ball got so open because his defender was picked at the start of the play.  That’s a tough way to lose a game.

Billy Koehler is the founder of ThirdDownDraw.com and a contributing writer at DixielandSports.com. He has been covering college football since 2006. You can follow him on twitter @billykoehler.
View all posts by Billy Koehler →
This entry was posted in Concepts, News, Schemes and tagged Crossing Routes, man to man, Pick Play, TCU, Texas Tech. Bookmark the permalink.